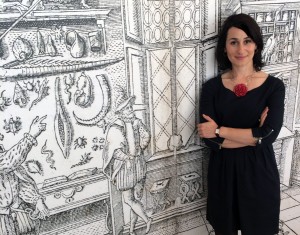 Daniela Bleichmar is Associate Professor in the departments of Art History and History at the University of Southern California, where she also serves as Associate Provost for Faculty and Student Initiatives in the Arts and Humanities. She is the founding director of the Levan Institute for the Humanities.

Professor Bleichmar grew up in Argentina and Mexico before immigrating to the U.S. She studied at Harvard University (BA, 1996) and Princeton University (PhD, 2005). Before joining the USC faculty, she held a Mellon Post-Doctoral Fellowship through the USC-Huntington Early Modern Studies Institute, with which she remains actively involved. She is also a member of the executive committee of the USC Visual Studies Research Institute.

She has received multiple prizes and fellowships for her scholarship, including a Mellon Foundation Post-Doctoral Fellowship (2004–2006) a Getty Foundation Post-Doctoral Fellowship (2008–2009), a Getty Research Institute fellowship (2013–2014), and an ACLS Frederick Burkhardt Fellowship (2018–2019). In 2007 she was honored by Smithsonian Magazine as one of “37 under 36. America’s Young Innovators in the Arts and Sciences.” Her teaching and mentorship have been recognized with the USC College General Education Teaching Award (2008) and the Professor of Color Recognition Award from the USC Undergraduate Student Government (2015).

Her book Visual Voyages: Images of Latin American from Columbus to Darwin (Yale University Press, 2017) explores the intertwined histories of art and science, the Americas and Europe from 1492 to 1859. In this period, the depiction of the natural world played a central role in shaping how people on both sides of the Atlantic understood and imaged the region we now know as Latin America. Nature provided incentives for exploration, commodities for trade, specimens for scientific investigation, and manifestations of divine forces. It also yielded a rich trove of representations, created both by natives to the region and visitors. Visual Voyages shows that these images were not only works of art but also instruments for the production of knowledge, with scientific, social, and political repercussions. Early depictions of Latin American nature introduced European audiences to native medicines and religious practices. By the 17th century, revelatory accounts of tobacco, chocolate, and cochineal reshaped science, trade, and empire around the globe. In the 18th and 19th centuries, collections and scientific expeditions produced both patriotic and imperial visions of Latin America. Through an interdisciplinary examination of more than 150 maps, illustrated manuscripts, still lifes, and landscape paintings spanning four hundred years, this book establishes Latin America as a critical site for scientific and artistic exploration, affirming that region’s transformation and the transformation of Europe as vitally connected histories.

This publication accompanied a major international exhibition also entitled Visual Voyages, for which Professor Bleichmar served as guest curator. Held at the Huntington Library, Art Collections, and Botanical Gardens (September 2017–January 2018) as part of the Getty Foundation’s landmark initiative Pacific Standard Time: Los Angeles/Latin America, the exhibition provided 34,000 visitors with a unique opportunity to experience first-hand treasures from the Huntington and other national and international collections.

Professor Bleichmar is also the author of Visible Empire. Botanical Expeditions and Visual Culture in the Hispanic Enlightenment  (University of Chicago Press, 2012; Spanish translation: El imperio visible: Expediciones botánicas y cultura visual en la Ilustración hispánica, Fondo de Cultura Económica, 2016). The book is a study of five scientific expeditions funded by the Spanish crown to explore the natural history of the Spanish Americas and the Philippines between 1777 and 1808. These expeditions brought together naturalists and artists, who working collaboratively produced about twelve thousand illustrations of imperial nature. The book discusses the status and uses of images in eighteenth-century natural history; the importance of visual material in training the expert eyes and skilled hands of naturalists; the role of print culture in establishing a common vocabulary of scientific illustration; the interaction among visual evidence, textual evidence, and material evidence; and the ways in which colonial naturalists and artists appropriated and transformed European models, producing hybrid, local representations.

Visible Empire was recognized with multiple book prizes: the 2014 Herbert Baxter Adams Prize for the best book in European history from ancient times to 1815 (American Historical Association); the 2014 Levinson prize for the most outstanding book in the history of the life sciences and natural history (History of Science Society); the  2013 Leo Gershoy award for the most outstanding book in 17th- and 18th-century European history (American Historical Association); the 2013 Tufts book award (American Society for Hispanic Art Historical Studies); the 2013 Phi Kappa Phi award for the best book by a faculty member of the University of Southern California; and the 2012 PROSE award for the best book in the history of science, medicine, and technology (Association of American Publishers). It also received an Honorable Mention for the 2013 Arvey book award (Association for Latin American Art).

She has published widely on visual culture and natural history in the Hispanic world and early modern Europe, and co-edited four volumes. A full list of publications appears on her CV.

She is currently researching and writing a book with the working title The Itinerant Lives of Painted Books: Mexican Codices and Transatlantic Knowledge in the Early Modern World.